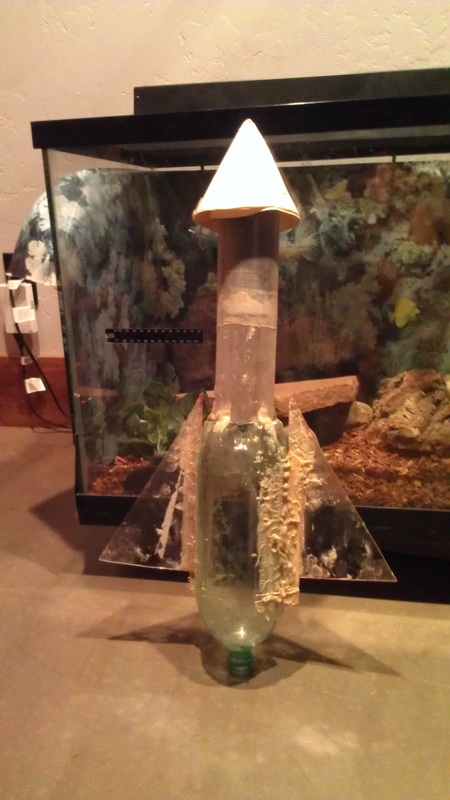 Entry 1- Day 6: We have decided to put the parachute in the nob instead of the tubes. We are trying to think of how to attach the hollow tubes on the sides.

Entry 2- Day 7:  We have decided to ditch the tubes idea and just go with the fine on each side.  We feel like we didn't need them due to the fact of the parachute being in the nob.

Entry 3- Day 8: Failure. Eli was on the task of gluing the wings. He kept them on by rubber bands and over night they moved the winds all over the place. The wings are lopsided and sharp pieces of glue are all over the rocket.

Entry 4- Day 9: Success. We have put multiple pieces of glue off. I spent all day taking them off. The rocket will not fly straighter but it will be safer and have a less % of detonating.

Entry 5- Day 10: I spent today making a big parachute and i feel like it isn't doing the job. I will see what to do tomorrow.

Entry 6- Day 11: I have taken off the one parachute and made two smaller ones. The will deploy easier and come out easier. All I need to make is a nose cone.

Entry 8- Day 13: Eli did most of the work today due to the fact I wasn't there for the the test launch.

Entry 9- Day 14: Last test launch. I added knew parachutes and they worked perfectly and I put a typical nose-cone on it. Last day before official launch.

%Error in flight time (due to Fair friction):

When we did our first test launch our parachute opened but it didn't go straight up. Me and Eli tried to fix the problem but
we couldn't find a way for it to fly straight. The parachute was one of the best though. The day of the launch came and I had done
everything I could to correct to design. I loaded it in front of everyone and the trigger was pulled. Suddenly the rocket flew towards
the audience and the worst part was, the parachute didn't deploy. As for our performance, me and Eli messed around some. The
glueing job was done badly (Eli) and this was the cause of the mis-flight.

My conclusion is that to really concentrate on the details when making your rocket. How you pack the parachute, do the
glueing job, and put the bottles together all matter on the performance of the rocket when it's in the air. Working with Eli was good
I had just hoped he had advocated for himself and done a little more of the work. He came out in the end and helped with the math
and writing. This was a fun project I had just wished we had watched some videos and learned more about the physics of the
rockets.
Powered by